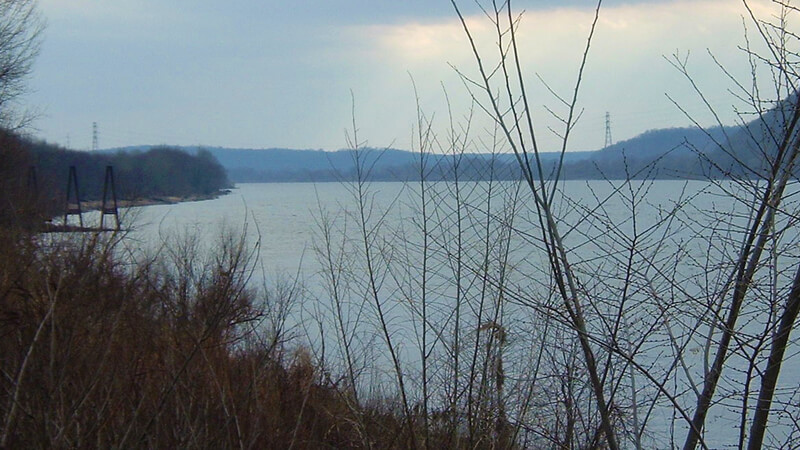 Kentucky is characterized as much by its waterways as by its landmass, especially the more than 650 miles of the Ohio River that defines the state’s northern border, also part of the famous Mason-Dixon Line that once divided North from South.

Kentucky’s western tip is carved by a short section of the Mississippi River, and its eastern reaches are outlined by the Big Sandy River. Kentucky, Cumberland, Tennessee, Green, Salt, Licking, and Red Rivers flow through it, as well as endless smaller streams and creeks. A bounty of lakes created from rivers includes three of the largest man-made lakes east of the Mississippi (Cumberland, Barkley, and Kentucky Lakes), where gorgeous vistas and varied recreational opportunities lure thousands for vacations, water sports, and boating.

The history and present-day attractions associated with these waterways provide a unique insight into the character of the commonwealth. In any region of the state, you’ll find views that offer windows for learning about how its development was influenced by the relationship to these waterways.

Paducah is a western Kentucky center of river commerce whose economic role has been shaped by its location along the banks of the Ohio River. Because of the city’s position at the confluence of the Tennessee and Ohio Rivers and its close proximity to the Mississippi and Cumberland Rivers, it has become a hub for the inland waterways industry. More than 20 barge and towing companies are located there and can be seen chugging their cargo up and down the riverways.

At the River Discovery Center (website), housed in one of Paducah’s oldest buildings, visitors can feel what it’s like to pilot a towboat and view a video capsule that shows 24 hours of traffic on this important juncture in the river. The history, culture, and music of the river are represented in exhibits that also include the river transportation industry. The museum has grown so in popularity that an expansion is planned to be completed over the next several years to accommodate more visitors.

At Columbus-Belmont State Park in Hickman County, the history of Kentucky’s short but important section of the Mississippi River comes alive. This 156-acre site had a crucial role in the Civil War as the scene of 1861’s Battle of Belmont.  The battle opened the Union’s western campaign under the command of Gen. Ulysses S. Grant in his first Civil War engagement.

Here, park visitors can see across the wide expanse of the river to Missouri and just may be able to imagine the battle while walking along the bluffs and on massive earthen works that formed the Confederate trenches.  An unusual park feature is a huge, six-ton anchor that held a massive chain that stretched all the way across the Mississippi River.  The chain was a Confederate strategy to block Union gunboats navigating the river.  The park’s campground is also situated high on the bluffs, affording visitors a beautiful view of the river.

The Kentucky River Museum is located in Boonesborough between Lexington and Richmond.  Opened in 2002 at the site of a former lock operator’s home, the museum is part of Fort Boonesborough State Park where Daniel Boone established one of the first pioneer fortifications west of the Allegheny Mountains.

The museum brings home the importance of the winding Kentucky River in the early economic development of the commonwealth.  Over the years it has maintained significance as a water source and as an attraction for visitors who come to hike, canoe, kayak, and fish among the river’s dramatic palisades. One of the oldest rivers in North America, it is lined in places with three-hundred-foot-high limestone walls. Between 1836 and 1917 a series of fourteen locks and dams were built along the main channel to maintain a six-foot pool stage.

The Dixie Belle Riverboat seasonally plies the river from its port on the banks below Shaker Village at Pleasant Hill near Harrodsburg. The paddleboat replica provides a scenic perspective for what early river travel was like and is a relaxing starting point for river exploration.

Famed for the annual Kentucky Derby held at Churchill Downs each April, Louisville is the state’s first major river town, with several attractions that reflect the Ohio River’s key role in the city’s development. The Portland Museum tells the story of this once separate town below the Falls of the Ohio that is now a Louisville neighborhood. The museum, housed in an 1852 mansion with a modern addition, depicts Portland’s development in the 19th century. Fascinating river characters and events are brought to life through dioramas, sounds, models, and automated lights. 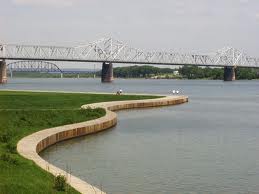 While touring the museum, seize the opportunity to make the acquaintance of the attention-grabbing robotic mannequin of Portland’s Captain Mary Millicent Miller. She was the first woman to be licensed as a steamboat master in the United States. The life-size mannequin tells the story of how Capt. Mary became a “lady steamboat man” using the colorful language of the 19th-century steamboat trade.

River lovers can also see the Army Corps of Engineers’ McAlpine Lock and Dam in operation. Easily accessible to walkers, bicyclists, and autos from N. 27th Street in Louisville, the lock and dam make the Ohio River navigable for barge and boat traffic from Cincinnati to Louisville. The dam circumvents the Falls of the Ohio, and the lock, an impressive engineering feat, operates day and night.

Just across the river on the Indiana shore is the Falls of the Ohio State Park, which has an Interpretive Center/Museum that explains the history of fossil beds that date to the Devonian era 386 million years ago and offers aquariums featuring coral reefs and the Ohio River ecosystems as well as a gigantic mammoth skeleton in the entry. A documentary film gives you a glimpse into the world of the Devonian sea.

Other river attractions in Louisville include the historic Belle of Louisville (website), a century-old stern-wheel steamboat that transports passengers on excursions up and down the Ohio to the distinctive strains of a calliope.  A more modern sister vessel, the Spirit of Jefferson, hosts private parties.

Frankfort, Kentucky’s capital city, is bisected by the Kentucky River, which makes an s-turn as it passes through the center of town. The river valley widens at this point, which creates four distinct parts of the city. Atop a hill is the stately capital building surrounded by an elegant leafy area full of century-old houses while across the river is the Frankfort Cemetery, which is purportedly the last resting place of Daniel Boone – this is somewhat disputed since Boone was initially buried in Missouri and later a body claimed to be Boone’s was re-buried in Frankfort. Both states now claim they have the true Daniel Boone burial site.

Frankfort probably received its name from an event that took place in the 1780s when Native Americans attacked a group of pioneers who were making salt at a ford in the Kentucky River. One of the pioneers, Stephen Frank, was killed, and the crossing became known as “Frank’s Ford.” Later this name was shortened to Frankfort.

Perhaps the city’s most popular destination, Buffalo Trace Distillery, located on the Kentucky River banks in Frankfort, is named after the fact that buffalo herds used to cross the river at this spot. The name is the owners’ way of paying tribute to the mighty herds that carved paths in the wilderness that were followed by settlers. The site was first settled in 1775 by brothers Hancock and Wills Lee, and was originally called Leestown. The story goes that the region’s fine limestone-filtered water and burgeoning grain farmers made it an ideal place for a distillery, and, perhaps due to those circumstances, there has been a working distillery on the site since 1787. Today you can take a tour and watch a film about the distillery’s history then sip some bourbon in the tasting room. For more stops on the Kentucky Bourbon Trail click here.

About a 100 mile drive upriver from Louisville are the northern Kentucky Ohio River towns of Covington, Newport, Dayton, and others. Just across the river from Cincinnati, Covington and Newport exude histories that were shaped by their location at the confluence of the Licking River and the Ohio. The northernmost tip of the state continues to lure visitors to a part of the Ohio where the Underground Railroad once played a major role in the Civil War.

An exhibit at the Behringer-Crawford Museum (website) in Covington’s Devou Park includes riverboat memorabilia and a simulator that allows visitors to pilot a vessel. The museum’s Rollin’ on the River exhibit displays the different forms of transportation that have been used to navigate the Ohio River from Native Americans to the modern-day.

Board an excursion through the river valley on modern stern wheelers operated by BB Riverboats in Newport (website) and Queen City Riverboats in Dayton (website). To better understand the importance of river traffic before the days of the automobile, stroll across the Roebling Suspension Bridge, the first to be constructed in the area through its completion was interrupted by the Civil War, and the prototype for New York City’s Brooklyn Bridge.

Newport’s Purple People Bridge (website) allows you and fellow pedestrians an elevated perch where you can amble across the river at your own pace.  The bridge began its history as an L&N Railroad bridge and was later expanded to accommodate autos. Now it’s reserved for crossing by people power-alone. Painted lavender, it provides vistas of cityscapes and river traffic from another point of view.

Floodwalls that hold back overflowing rivers from city streets and buildings have a dual role as artist canvases for murals that illustrate stories of community history.  From one end of the Ohio River to another, artists’ interpretations depict the ties between river and town. Murals are found in many communities, including Catlettsburg, Maysville, Newport, and Paducah.

The charming small town of Augusta which lies between Maysville and Newport has a scenic riverwalk above the Ohio banks that have seen little change throughout its history. While there, hop a ferry ride to the Ohio shore and back. The Jenny Ann is one of the oldest ferry services still in operation on the Ohio River, and foot travelers ride free. It operates seven days a week from the Augusta bank — which also claims fame as a residence for actress and singer Rosemary Clooney. Her nephew, producer, director, and actor George Clooney, another Kentucky native, grew up in the hamlet. Sample the river crossing via live “ferry cam” at AugustaKy.com.

Other ferries still operate slower-paced travel at two other junctions on the Ohio: near Petersburg, just downriver from Covington, and in Crittenden County across from Cave in Rock, Ill.  You’ll also find ferries at Valley View on the Kentucky River in Jessamine County south of Lexington and at Hickman on the Mississippi River.

Campground: Open year round (no water in winter).

Hours: The Belle maintains a regular cruise schedule May through October and offers special events, private charters & wedding facilities through out the year. For a complete listing of week’s events, including special events, check the cruise calendar.

Check for public cruise dates on calendar of events. Public cruises can be opened for groups of 30 or more. Call for information.