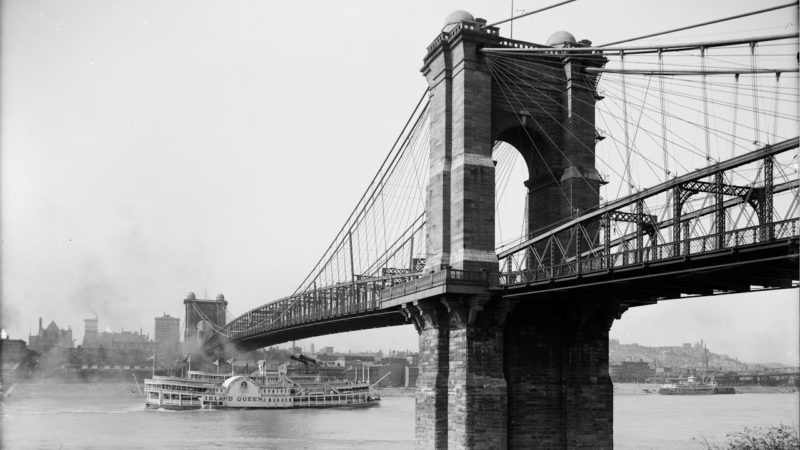 The Roebling Suspension Bridge spans the Ohio River between Covington and Cincinnati. The historic bridge was the template for New York’s Brooklyn Bridge.

The John A. Roebling Bridge, with its distinctive blue color and picturesque architecture, is one of the Cincinnati area’s most historic landmarks. The bridge crosses the Ohio River and connects Cincinnati with Covington, Kentucky. The bridge was registered as a National Historic Landmark the same year the Big Red Machine won their first World Series, 1975.

When the bridge opened to foot traffic in 1866, it was the world’s longest suspension bridge. This title was surrendered in 1883, when the Brooklyn Bridge opened. Coincidentally, both bridges were designed by the same man, John Roebling. Cincinnati’s Suspension Bridge re-opened to vehicular traffic on November 5, 2010 after being closed for painting for seven months.

According to the 1850 Census, Cincinnati had the 6th largest urban population in America. With the burgeoning population of both Newport and Covington, Kentucky, there was a pressing need for a bridge to facilitate traffic across the Ohio River. According to the Covington-Cincinnati Suspension Bridge Committee’s website, there was considerable debate over the idea of a bridge, mostly voiced by steamboat interests, which held up the plan for almost a decade.

However, construction of the bridge by John A. Roebling began in 1856. The project suffered some setbacks due to the economy and the Civil War. The latter event was the tipping point that convinced even naysayers that a bridge at this site was vital. Funding returned and construction resumed after the War Between the States, and the bridge finally opened to pedestrians on December 1, 1866. It opened to other traffic early in 1867.

Cincinnati-Transit.net reports that the 1,057 foot main span of the Covington and Cincinnati Bridge was the world’s longest such span when the bridge opened in 1866. (The bridge wasn’t dubbed the John A. Roebling Suspension Bridge until much later.) Several architectural innovations were employed by Roebling on the bridge, including vertical suspenders and the diagonal stays that connect to the towers.

John Roebling also used several new ideas of excavation and pumping when preparing the bed of the Ohio River for the bridge’s foundation. Many of these same techniques and building flourishes were used a few decades later when Roebling designed and built the much more famous Brooklyn Bridge, which was much longer than Cincinnati’s Suspension Bridge.

The John A. Roebling Suspension Bridge remains a popular tourist attraction and a useful means of transportation between Ohio and Kentucky. Some major reinforcement was added in the 1890s to accommodate modern traffic. Due to weight limits put in place in 2007, the local TANK (Transit Authority of Northern Kentucky) bus had to cease operation on the bridge, but cars, shuttles, and pedestrians are easily able to use it.

Covington’s historic Licking Riverside neighborhood is undergoing a renaissance, and the Suspension Bridge (as it’s known locally) is a keystone of the area. There are several historic landmarks, restaurants, and shops in the area, as well as specific events, like the annual Roebling Fest.

Covington’s newly adopted Roebling Point Plan will further develop the Suspension Bridge’s immediate locale, making the area even more attractive to out-of-town visitors. The bridge is a popular walking span for those attending Cincinnati Reds or Bengals games or the annual Riverfest fireworks show, as well as those wanting to sample Cincinnati-style chili at the many Skyline, Gold Star, Empress, or Dixie Chili restaurants within walking distance of the bridge.

The John A. Roebling Suspension Bridge was closed for painting from April to November of 2010, but opened to traffic again on November 5, 2010 with a special ceremony.