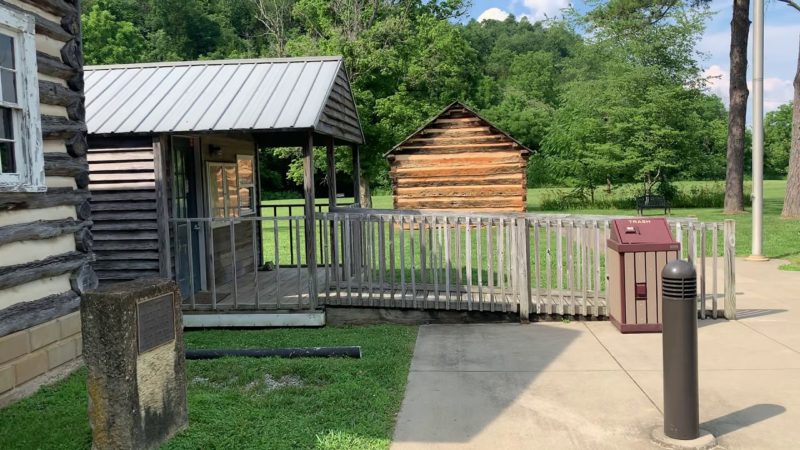 This part of the country is beautiful. Rolling hills, miles of green pastures, horse farms and picturesque barns offer incredible scenery to delight one’s senses during travel between the various destinations. Take the back roads, take your time and enjoy!

Our sixteenth president, Abraham Lincoln, began and lived for the first seven years of his life in Kentucky. The Kentucky Lincoln Heritage Trail outlines this part of his and his family’s life, and a visit to three locations (easily visited in a day) provides an understanding of Abraham Lincoln’s humble beginnings. The Lincoln Birthplace National Historic Site and nearby Knob Creek (outside Hodgenville, KY) profile Lincoln’s early years. The Lincoln Homestead State Park is on the original land settled by the Lincoln family in Kentucky. There is a replica cabin built on the spot where the original 1782 cabin stood, which was the home of Abraham’s father Thomas Lincoln. Also in the park is the original cabin of Abraham’s mother, Nancy Hanks, and nearby is Abraham’s favorite uncle Mordecai Lincoln’s house.

Nearby is Loretto and the Maker’s Mark distillery. Originally the Burks Spring Distillery and Grist Mill started here in 1805, just 13 years after Kentucky became a state, and they sold whiskey to the locals out of barrels from the Quart House. Nearby in 1843 T.W. Samuels started a distillery, using rye as a main ingredient in his brew. There were 183 distilleries in Kentucky when prohibition occurred in the 1920s, after which only four permits were given to produce alcohol (not including the Samuels’ business).

In 1936 Bill Samuels took over the Samuels’ distillery and modified the recipe- he replaced rye with winter wheat, which made up 16% of the brew, along with 70% corn and 14% barley. He sold the distillery in 1943 and for the next ten years perfected his recipe by baking hundreds of loaves of bread (which just so happens to use the same ingredients).

In 1953 Bill Samuels purchased the abandoned Burks Spring Distillery on a limestone filtered spring (which removes iron) that feeds a ten acre lake. He now had a perfect bourbon recipe, and his wife Marjorie designed the recognizable mark for which the distillery is named- S for Samuels, IV because they were the fourth generation of commercial distillers in the family, and a star for Star Hills Farm (the location of the business). Free tours/tastings are offered, as well as the opportunity to dip your own bottle of Maker’s Mark Bourbon Whiskey.

Judge John Rowan built his house, named Federal Hill, in 1818; his father was a U.S. Representative and noted captain in the American Revolution, and came to Bardstown primarily for the educational opportunities available to his children. John would become a lawyer, Secretary of State, member of state congress, and Judge of the Court of Appeals for the state legislature. In 1824 he became a U.S. Senator.

Stephen Collins Foster, John Rowan’s cousin, was born in Pennsylvania, and was composing music already as a young boy. He occasionally visited his family at Federal Hill, and during one visit in 1852 he wrote the song that would later become Kentucky’s state song: “My Old Kentucky Home”. He has also written other notable songs, such as “Oh Susannah”, “Camptown Races”, and “Old Folks at Home” (also known as “Way Down Upon the Swanee River”, Florida’s state song). For a small fee the house (which is magnificent inside and out) may be toured. It is free to view it from the outside along with the family cemetery and gardens.

Take a day or two and explore some highlights within this region of KY. Learn about a past president, visit the home that inspired the state song, and taste KY bourbon.